When Rex’s mummy gave me a call and explained that she would love to do a Toy Story Cake Smash, I was thrilled! I adore creating a set up to match a client’s idea. And who doesn’t love a bit of Toy Story?! Here’s my favourite image from session….just look at that cheeky face!

When we discussed the set up, Rex’s mummy explained she would be able to provide all the Toy Story toys. So all I needed to do was plan which backdrop and arrange the cake. The obvious choice for a Toy Story cake smash backdrop is a mid blue colour – and I had just the colour already in the studio (Ceramic Blue from Creativity Backdrops for any interested cake smash photographers!). I cut out white clouds to stick to the backdrop and used a couple of crates to display the toys. Rex’s mummy also brought along the Toy Story letter cubes to spell out REX.

I didn’t own a specific Toy Story themed outfit so I suggested these red pants. I usually use these for my Hungry Caterpillar Cake Smash sessions but as they’re fairly plain (they have little white spots on them) they lend themselves to many different cake smash set ups. Plus the primary colours of red, blue and yellow are the main colours for a Toy story theme.

Where would I be without my wonderful cake supplier, Denise from Cakes Unlimited?! I asked her for a yellow base with blue icing with white clouds on. Blue icing for bakers is always a little tricky as can sometimes have a green tinge from using the (yellow) butter. But this cake delivered perfectly with the colours! 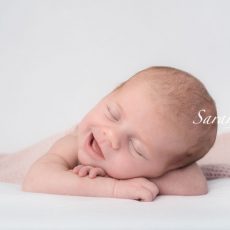